With less than a week to go before a big geophysics field campaign, the pace of work is picking up. Here a few updates about recent work


A Change of Scope

We've narrowed down the scope a bit of this project. Rather than comparing Fortress Lake and Bonsai Lake, we will be focusing just on the Bonsai Lake Watershed.

We did this for a few reasons. First, Bonsai Lake is quite unique in that it's a high-elevation, first-order watershed that is readily accessible by vehicle. In terms of doing geophysics, it is an excellent opportunity for us to try out new or unusual geophysics data acquisition techniques that haven't been tested in an alpine environment. Second, Bonsai Lake has highly unusual geomorphology that makes it an interesting target. As we saw on June 18th on a site visit, there are weird moraines that overprint one another, and are generally pretty messy. Third, Bonsai Lake is closer to the Fortress Ridge Skiing area, so it is the more likely source of water if the resort decides to start making artificial snow. That makes getting a baseline understanding of groundwater more important. Finally, personally, my I'm very interested in learning more about advanced data processing and data acquisition. If we were to try to do two different sites, there would be less time for us to experiment with new techniques, to fix problems with data acquisition in the field, and our data would be much sparser. Narrowing the scope lets us focus on getting a single, high quality data set with good coverage.

With the weird geology of the area piquing his curiosity, Dr. Gerald Osborne from the University of Calgary joined me for a day trip to the field site. Jerry and I were joined by Hongye Wu and May Guan of the University of Saskatchewan for part of the day. Jerry's expertise in surficial geology in alpine environments was very valuable in decoding this very unusual geological environment..

First we inspect the north end of the lake, where there are big blocky moraines that stop the flow of water over land, allowing this lake to form. While there is no stream leaving this lake, there is a spring about 100 m away, meaning water from the lake is exiting somehow. Jerry's best guess is that these ridges are recessional moraines. When this area was covered in glaciers, the ice stayed put in one spot so long that rocks falling off of the cliffs nearby fell directly onto the ice and eventually moved along the top of the glacier to be deposited on this moraine. That explains why the moraine is made up of boulders of all kinds of size (up to the size of trucks) and they still have sharp corners.

We also noticed a smaller moraine at a higher elevation that we later climbed too. It's clearly from a more recent period of cold climate, and the shape of rocks indicates that these rocks were actively pushed by the glacier (i.e. it's a terminal moraine).

Hongye also showed us her instrumentation, and pointed out interesting water features. In the marsh that feeds Bonsai Lake, there are two streams that run through it. One of these, which starts at a big talus cone, runs year round. I wonder why that is...

Ten days later, I returned to Bonsai with Masaki Hayashi and Larry Bentley, both professors at the University of Calgary. Having seen the different geological structures on sight, we wanted to now focus on the hydrology of the area. Based on what we saw at surface, we tried to make guesses about what's happening underground, that is, where and how is water getting into and out of the ground.

There are three main areas that interest us:

As far as we can tell, this big pile of rocks at base (the talus cone) is the main source of water in the area once most of the snow has melted. Hongye told us the stream that comes off of this pile of rocks is the only one that has water flowing in it all year round. Hence, there must be something about it that allows to store water. This will definitely be a spot we want to probe underground to understand what's going on. 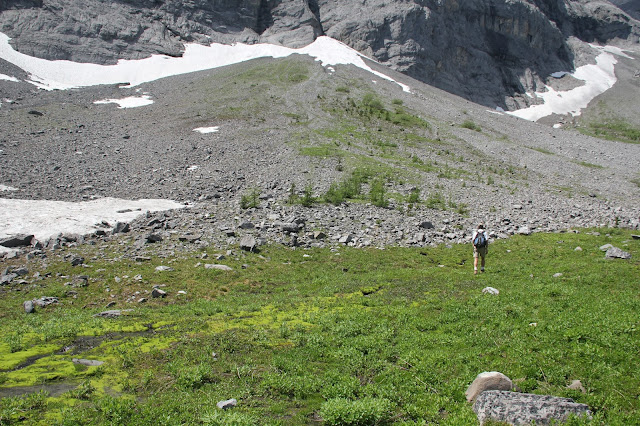 This marshy area is quite unusual. The surface of this valley generally slopes gently downwards, yet this place is flat enough to allow water to slow down, and for fine sediments to settle. Clearly, this muddy area must help store and slowly release water over the summer after all the snow has melted, but how deep exactly is this marsh? Does all the water form this marsh enters the lake via the stream, or does some of it seem through the ground? Again, we need to probe underground to find the answer. 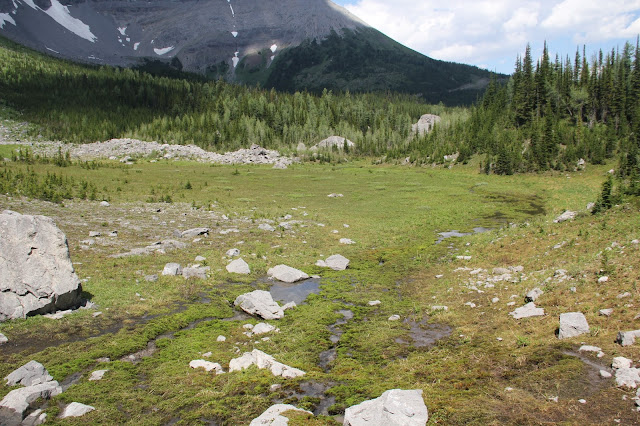 Finally, we inspect the north side of the lake again, and we take a closer look at these springs. Somehow, water is seeping from the lakebed, through this huge moraine on the north side, and exiting into the stream. Is there a big leak somewhere where the water rushes out, or does it seep in gradually all over the place. Again, some to probe underground.

On July 8th, Masaki and I will be doing some stream gauging, and confirming the location of our geophysics survey lines. Then, our wild 17 consecutive days of field work will begin on Monday, July 13. It's going to be hectic, but enlightening (we hope). 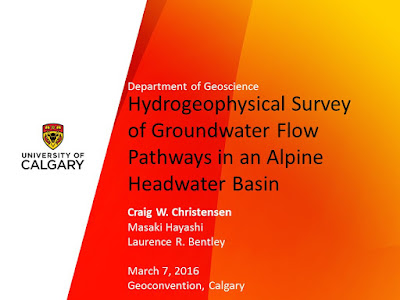